FREE SHIPPING FOR 150 € OF PURCHASE

Gérard Isirdi was born in Aubagne in 1950, the eleventh of twelve chidren of a family of Italian origin.
He spent his childhood in the village of Roquevaire to the South of Aix-en-Provence.

Bathed in the atmosphere of Cézanne’s landscapes, he lived a childhood that any painter would dream of.
The large family lived in a village house overlooking a magnificent square lined with century-old plane trees.
Every Sunday in Summer its terraces were populated with pétanque* players and the sight of these men was to inspire our painter.

Right from his childhood Gérard was to be irrisistibly attracted to painting. But he soon understood that he wouldn’t have the financial means to go to Art School. He would have to teach himself.

During his adolescence he took up with a group of painters who had come together under the name Painters of the Huveaune Valley. They saw in him a real painter’s temperament and he benefitted from their advice. This spurred him on and he went on to exhibit some of his paintings in collective exhibitions while continuing his artistic apprenticeship in the countryside of Provence.

Return to the South

In 1973 he taught himself engraving in Paris, making prints for other artists & living on odd jobs. As soon as he had earned enough he would buy canvasses and oils and throw himself into painting.

During the Summer of 1974 he travelled to Andalousia and Morocco where he painted the scenery.
In 1974 he had his first exhibition in Roquevaire which was to be a success. The same year he was invited to Rigny le Ferron (Aube) by the painter Arsène Sari who advised and encouraged him. This led to an exhibition in the museum of Arsonval.

Back in the South his painting was to evolve in a new way becoming more abstract. This corresponded to a time of tumult in his life.
In 1980 he discovered the Luberon where for five years he lived in the ruins of a farm set into the rock face. This return to nature opened up a new world for him ; his art was to evolve and take a new direction. At this time he took up work as a gardener to earn his living as he painted.

In 1990 he resolved to give all his time to his art work and, on setting up his studio in Lourmarin, he received encouragement from his followers.

His beginnings as a professional painter were marked by 3 important shows : Annecy in 1993, San Francisco in 1994 and Geneva in 1998 and his works were bought by well-known art collectors.

1995 saw the start of a new episode : sketches and studies of the clients seated at the Lourmarin café terraces.
Isirdi would sit in the corner of a terrace and sketch passers-by or people at the tables. These sketches increased in detail and colour to become stylized, alive.
These Café Scenes were to bring him world-wide recognition, in particular Homme au journal, Femme au chapeau, Femme au journal and Femme à la casquette all to be published in poster form, screenprints , engravings and lithographies and all to become must-haves in the world of contemporary art and decoration.

*pétanque : a game similar to bowls, played with fist-sized metal balls aimed at a smaller one. 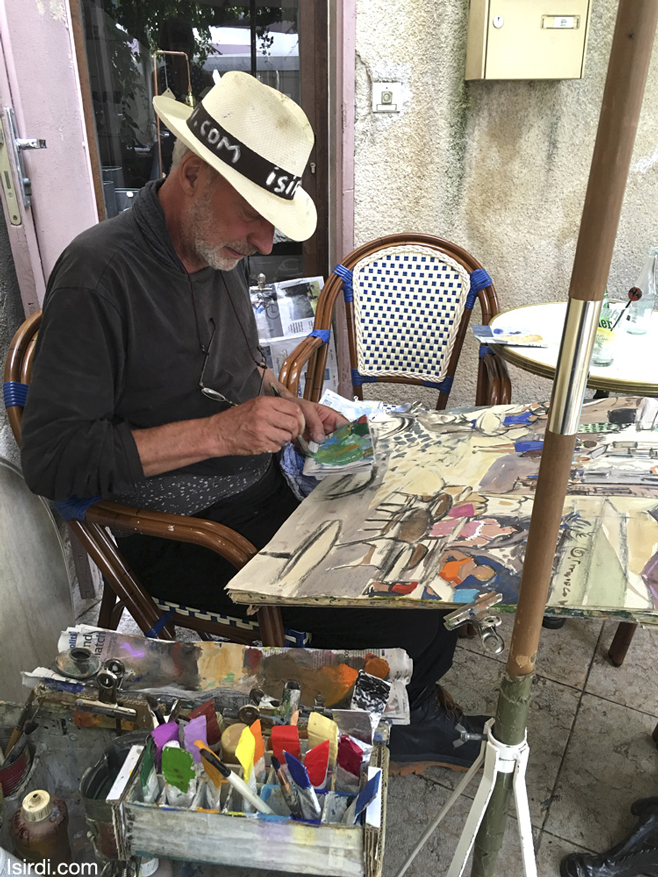